US Women’s Hockey Team skates to Gold after 20 years 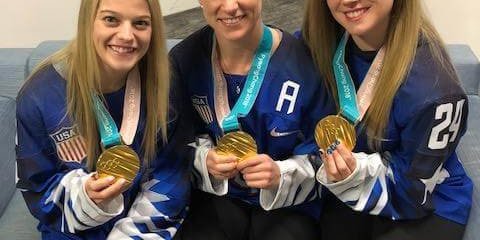 Sticks, gloves, and helmets flew onto the ice. Players scrambled over the wall into a heap of happy humanity, a spontaneous flash mob of celebration perhaps scarcely remembered after the fact. What they do remember is that one point, the point that signaled the victory of the US Women’s Hockey Team over Canada in the Games of PyeongChang.

Final score of the shootout: 3 to 2, with that final point meaning everything.

Kacey Bellamy, whose recent insights about getting better every day(Read her article) captured the attitude of the entire US team, was a key contributor to the victory. In addition to the high tally of minutes she played throughout the tournament, this Shaklee Pure Performance Team member provided the leadership and toughness that helped the Women’s Hockey Team prevail. She was joined by Shaklee athletes Dani Cameranesi and Emily Pfalzer, participating in their first Games. These were the third Games for Kacey, who picked up silver medals in Vancouver in 2010 and in Sochi in 2014, losing to Canada in both final matches.

“Our objective was to get to the pinnacle, to the gold medal, and we knew we could achieve that if we played for each other and tried to get better every day,” said Kacey. “Those day-to-day small steps of improvement on and off the ice are the difference, I think, in anything in life. Trying to get better every day in small ways and always putting your best effort and attitude toward it.”

History was not on their side. The US had lost to Canada in four previous Games dating back to 2002, and Canada had  in fact defeated the US team in group play one week earlier in PyeongChang. But history often pivots on a single point, and the US women knew they were outplaying Canada and would eventually prevail. They knew one point was all it would take.

In spite of going into the final period of the gold medal game trailing 2 to 1, the US team battled back to tie it up at the end of regulation play, and remained tied though the 20-minute overtime period. History loves drama, and as the shootout seesawed with the US scoring the last point, the brave women created their own “Miracle on Ice” moment that erupted in flags, medals, photo flashes, and smiles for the ages.

Said Dani after the victory: “There is truly no greater feeling than winning a gold medal alongside my teammates. It is truly indescribable and humbling.” She continued: “However, we didn’t do it only for ourselves—we did it for our country and the people back home who helped us get to where we are today and for fans all over the world. The overwhelming support we’ve gotten makes the gold that much sweeter. I can’t thank everyone enough.”

Emily also recognized the significance of the moment when she said, “My first taste of the Games was walking into the opening ceremonies with my 22 amazing teammates and the US team as a whole. My last taste was standing arm in arm with gold medals around our necks, singing our national anthem. All of the time, hard work, and dedication our team put into this journey was well worth these memories that I will never forget.”

Added Kacey, “I want to thank the Shaklee Family for helping me and my teammates on this journey! It takes a village, and it’s the team behind the team that really makes the success happen!”

In the countless interviews and discussions following the victory, all three players kept circling back to their sense of gratitude for the support that helped them achieve their dream. History often hinges on a single moment, and success often hinges on a singular team spirit, as these Shaklee heroes on ice have certainly proven. And that is, indeed, one mighty point.