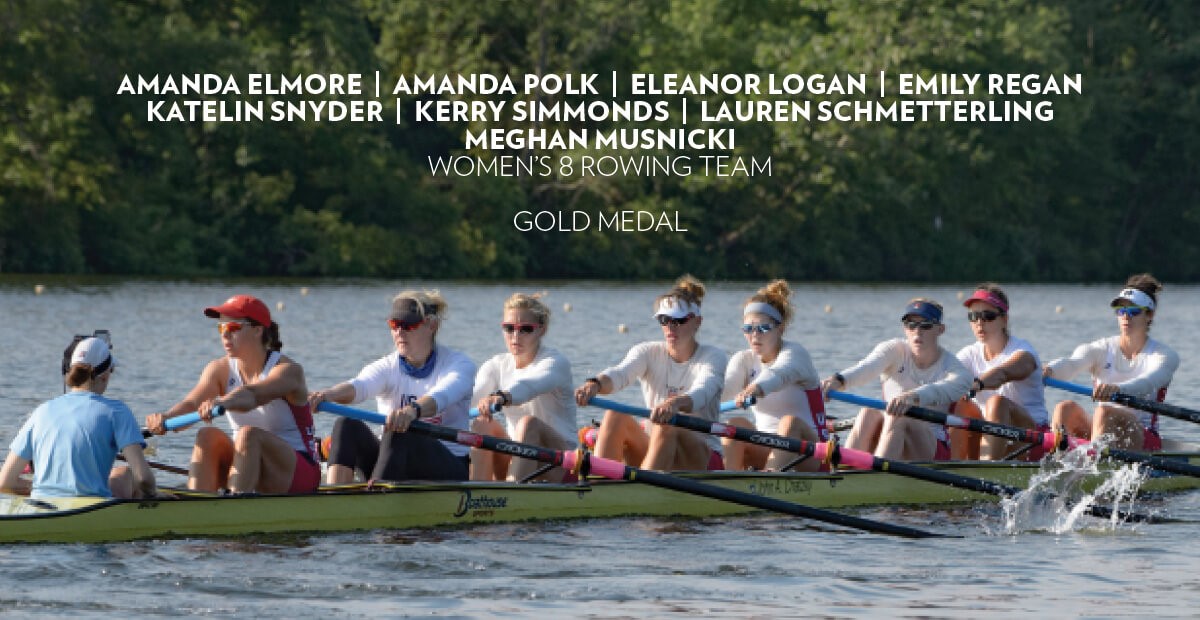 Shaklee Pure Performance Team member Caryn Davies whispered these words between gasps for air after rowing across the finish line in the 2012 games in London, as her teammate Caroline Lind reached to give her a victory hug.

It’s not that she didn’t want to share the triumph: “I was just in so much pain; the lactic acid buildup makes it sting when someone touches you. But then the pain turned to pure elation.” She added, “The Games gave me that reaffirmation of a tremendous pride in myself, my team, and my country that will stay with me forever—definitely worth the pain.”

The road to Rio

Pain and elation were clearly present for the Women’s Eight as they rowed for gold in their third consecutive victory, matching their performances in Beijing in 2008 and London in 2012. In fact, the Women’s Eight has enjoyed a decade of dominance, going undefeated in major competitions since 2006. Caryn was in the stroke seat then—the front rower who sets the pace for the other women throughout the race for those gold medals—and she remembers how the dominance began: “In 2004, a small group of people—athletes, coaches, administrators—realized the potential of the Women’s Eight, so we sort of collectively said, ‘Let’s do it!’ Well, there were only about eight of us rowers in line, so we jumped in and started working.”

Several factors aligned for this team of eight, including one great find: Mary Whipple. Mary was the coxswain for the University of Washington, and she turned her dominance on that crew (having lost only once) into a seat on the US National Team. She helped to instill the standards that define the team today. “In essence, it was refining ‘teamwork,’ as our norm; transcending the individual efforts for a better team performance,” said Mary. In 2013, Katelin Snyder became the coxswain for the Women’s Eight and the dominance continued. “We committed to learning from each other, and the harder we worked, the stronger we became as a team,” she explained. “We’re plunging into two-a-day workouts six days a week, holding each other accountable, and then making a conscious decision to deal with the adversity in a positive way. And we loved it!”

Rio: The best race of our lives

“It was just about the perfect race at the right time…”—Katelin Snyder, Rio 2016 gold medal winner

“We had several goals leading up to our final race,” said Katelin, “and we met those goals in the preliminary race. We especially wanted to relax in the third 500 meters of the 2000-meter race so that we could maintain our speed when other boats were dropping off.” They did more than maintain. Indeed, the surge was startling as the team hit the 1000-meter mark, taking over the lead and extending it to nearly a boat’s length. After crossing the finish line, the team members suppressed the pain of exertion to share hugs all around. “It was just about the perfect race at the right time, and although exhausted, we were all overjoyed at the finish. We had laid down the best race of our lives.”

“If we never got any recognition at all, I would still want to go race with you all.”—Amanda Elmore, Rio 2016 gold medal winner

Katelin realized the magnitude of the team’s accomplishment, but her satisfaction extended beyond the nine gold medals they claimed on a breezy day in Rio in 2016. “We worked hard and covered every base—physical training, sports psychology, great nutrition for strength and recovery, teamwork, and total commitment,” she said. “But a moment that really struck a chord with me occurred after the race when we were all preparing for a media event. Our stroke seat rower, Amanda Elmore, said something I’ll never forget. ‘If we never got any recognition at all,’ she said, ‘I would still want to go race with you all.’ There’s so much in that statement—so much.”

“Nine of us did something remarkable on that day, and you can’t touch that.”—Katelin Snyder

Shaklee Pure Performance Team members in the 2016 Women’s Eight include: