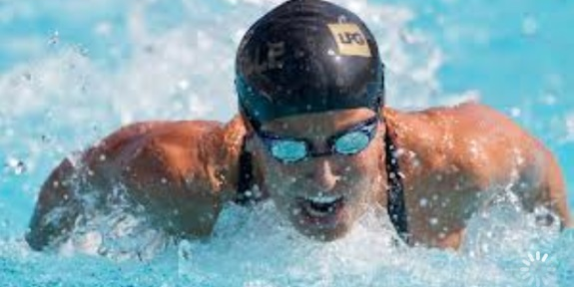 I was 8 years old when I stepped up to the blocks for my first swim race in a summer league competition in Northern California. My favorite coach, Sean Mason, was helping me set my cap and goggles properly. As he did so, he gave me a few tips for my race as well as with some calming words of inspiration.

My first memories in the pool are filled with my pure love for swimming. My friends and family surrounded the pool deck all summer long. I wore my Speedo swimsuit all day, every day, and I virtually lived at the pool. When we weren’t at the country club, my siblings and I were in our pool at home playing sharks and minnows or racing each other for hours.

I have loved the sport of swimming my entire life and have been racing in competitions for nearly 25 years now.

Challenges Along the Way

But there were also some difficult times. In my youth, I had dreams of swimming in the Summer Games but I didn’t actually believe I could achieve it. I doubted my abilities were strong enough and I loathed those 6:00 AM workouts. When I was a teenager, I almost quit because I wanted a “normal” life; I craved a social life and more balance. Swimming was demanding, exhausting, and it was an absolute battle to stay awake in class and finish my school work while meeting the demands of an extensive travel schedule. In high school, I would travel for weeks at a time for Junior Nationals and Senior National competitions. I qualified for my first Summer Games Trials when I was 16 but I was terrified to be racing against world record holders and Team USA members. I didn’t feel worthy to be on the same pool deck as them.

Working Toward the Dream

I never would have known that one day I would achieve my wildest dreams. I might not have believed I measured up well against the top swimmers in the country and might have lacked some confidence in myself, but I was an accomplished swimmer in my own right. I had set the national high school record in the 100-yard freestyle and was recruited by the best universities in the country. When I was 18 years old, I signed a full-ride scholarship to UCLA and expectations for me were high, though some people doubted me. I had even heard rumors that some teammates had said I would sink at a Division I program. That first year at UCLA was painful; completing the grueling schedule of weight lifting and cross training on top of swimming two times a day was a tremendous struggle for me. I honestly didn’t think I could make it for four years at that level. The physical and mental pressure weighed on me to the point that I broke down emotionally to my coach and my closest teammate a couple times in the middle of the season; they listened and supported me and encouraged me to push through the pain. And though I had struggled, I grew stronger. At the end of season, I swam lifetime bests and was named the PAC-10 Swimmer of the Year. I knew then that the rigorous journey was worth every moment of doubt and suffering.  My confidence grew, my experience expanded, and my goals became more ambitious. At my second Summer Games Trials, I qualified for the final heat of the women’s 200-meter butterfly and raced against my idol, Misty Hyman. She was the fastest butterfly swimmer in the world at the time, held the American record, and had earned a gold medal in the 2000 Summer Games. Even though I failed to make the US Team that year, racing Misty changed my life. I realized in that race that I could become a member of Team USA if I explored new ways of training. I began working with a sports psychologist, a nutritionist, and began Pilates work.

The following year, 2005, for the first time I qualified for a team that would compete in international competitions and I began racing around the world. I won the U.S. Nationals, medaled in the World Championships, and trained with Michael Phelps at high-altitude training camps. I had never been so prepared in my life.  Finally, I made the US team for the 2008 Games, earning a spot on the 4 x 200 freestyle relay. We came home with a bronze medal in that event!

It was surreal racing at the 2008 Games in Beijing—it felt like a dream. I had visualized that moment for as long as I could remember. It was overwhelming to be in Beijing, competing among the best athletes in the world. Watching Michael Phelps swim his way to eight gold medals and make history was absolutely incredible. Representing the United States at the Games is the highest honor an athlete can ever experience. I feel so thankful for all who helped me achieve my dreams. My coaches and my family have been my source of support and strength and I owe it all to them.  Swimming at the Summer Games has given me a platform to teach and inspire athletes around the world. I have traveled throughout Asia, Europe, and the US, conducting swim clinics for youth teams and masters teams. I share my favorite drills and the life lessons I’ve learned through the sport.

I currently work for a women’s sports media company based in New York, Excelle Sports; we cover women in sports like never before (check it out on www.excellesports.com) and the job allows me to stay connected to the energy and excitement of sports—it’s been a great journey that continues today!

The Role of Nutrition in Preparing the Body for Pregnancy
October 25, 2022